What is a Hobo Bag and Why do You Need One? A hobo bag is an evermore fashion accessorize. It is a well-known type of handbag, largely used as it is very practical. It can be worn over the shoulder, so the hands are completely free.

Probably that you bought at least one hobo bag before, and trough the article you will conclude why you should buy one more. Humans are visual creatures.

We like what we see. And when you see a nice bag, you just can’t resist buying it.

This type fits every day and evening nonchalant dress combinations and is perfect for women who wear a lot of trifles in their bags.

What's in the Article? When you hear the phrase “hobo bag” it can remind you of a real hobo or a bag in your closet. That is exactly how this handbag got its name.

The look of it is very similar to a sack this American sub-culture used to wear. This culture appeared at the end of the 19th century and since then the term is known also.

They were plain workers and lived a tough life. Wandering and traveling were an everyday struggle. In a search for a job, hobos had to wear almost all of the things for personal use.

Their bundle was a big one, filled with a lot of items. When you image in your head a hobo, he wears a stick and a dotted scarf, bandana, blanket tied around it. Hobos wore these bags on a stick, over the shoulder while they were on a holiday or on the road. The hobo bag obviously doesn’t have a stick, but the shape is very similar.

The difference is with the material also. A modern hobo bag is made of leather, artificial leather, linen, or some other soft fabric.

We've compiled a list of the best women's hobo bags. All of the selected items are high quality, stylish and durable. The review includes bags of similar but the most stylish design. The selected hobo bags differ in the type of leather, colors, and other differences. Now let's look at 6 of the best handmade bags made in the USA! 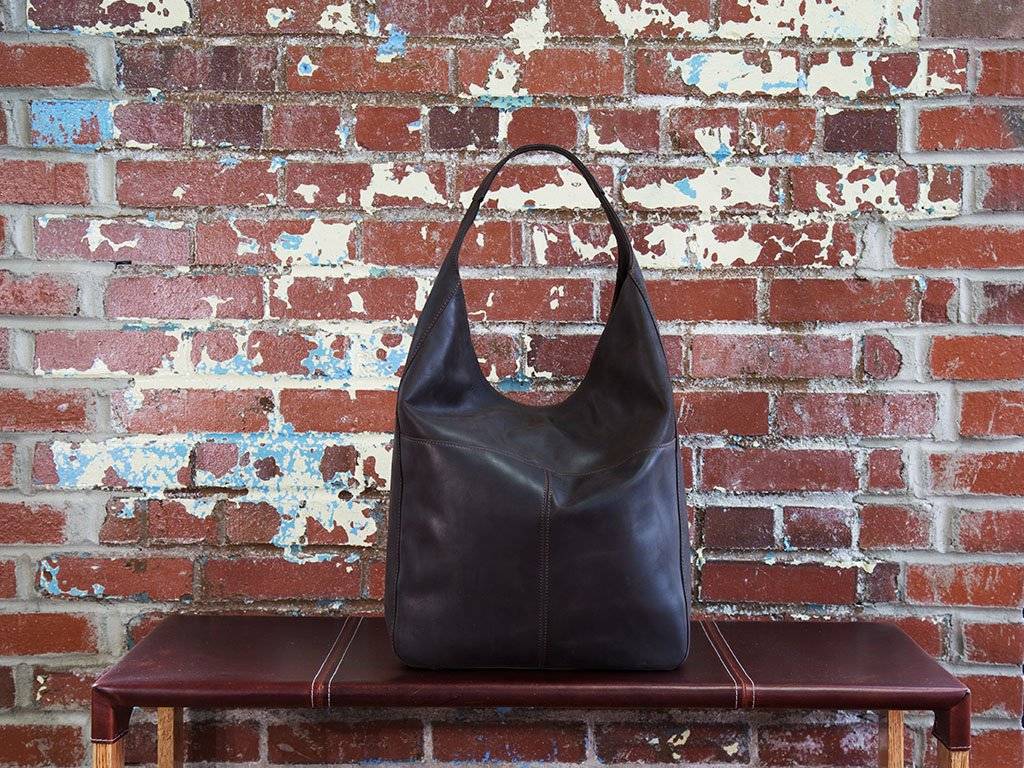 If you want a purse that matches every piece of clothing perfectly?

You are then at the appropriate stop. You require this brown leather hobo bag in supple leather.

The brown leather hobo bag exemplifies how style and utility can coexist. It is the ideal medium-sized bag for daily use — neither vast nor too little. 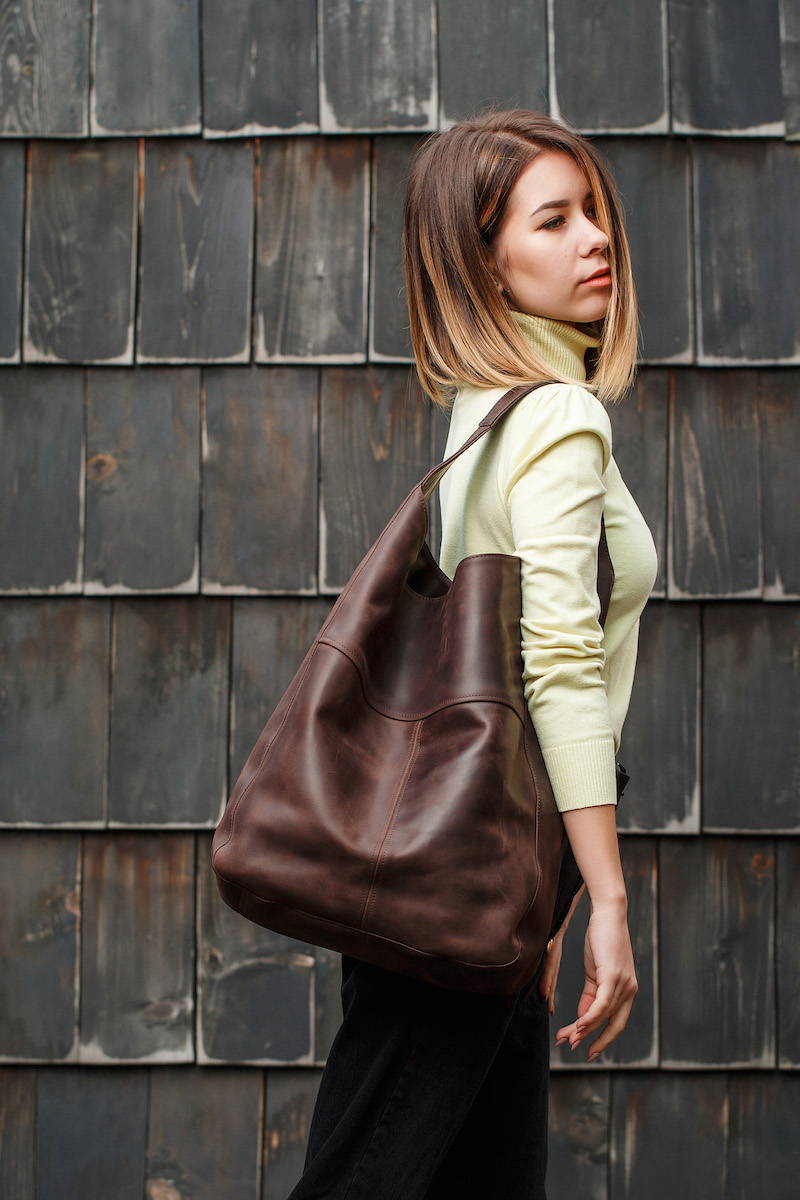 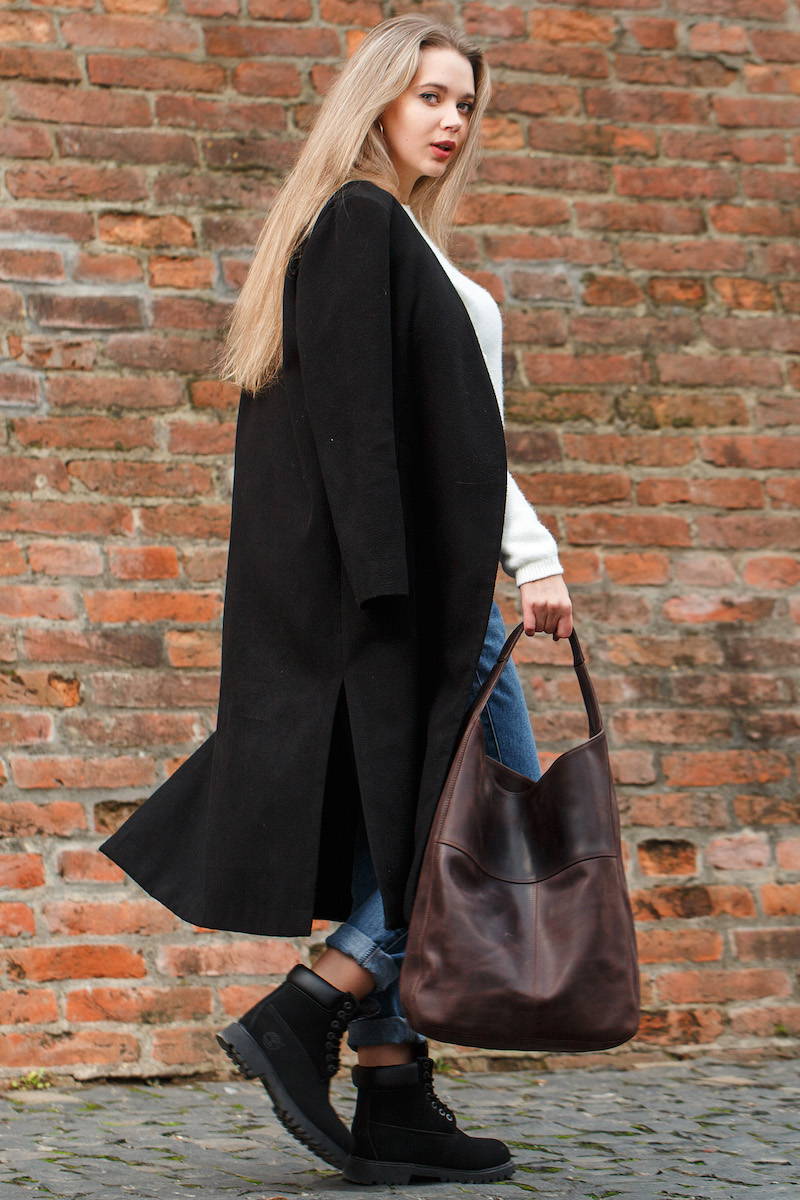 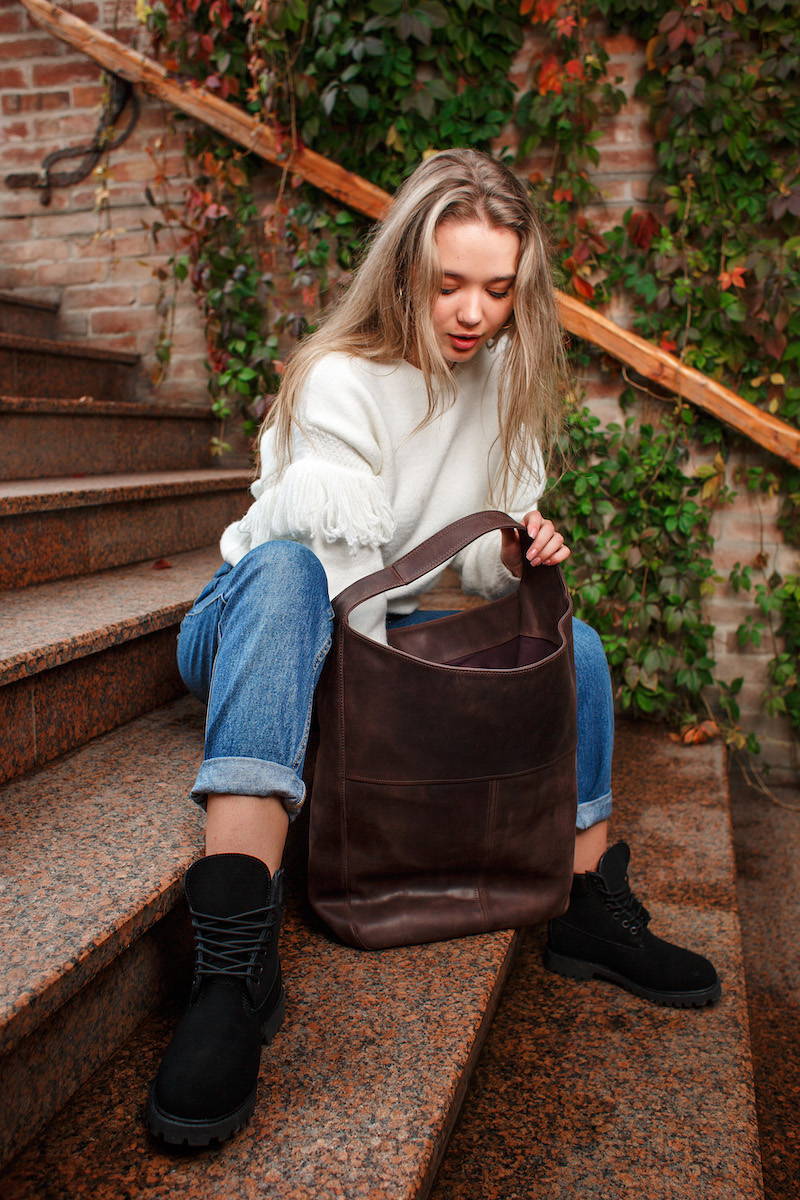 As you leave the house, you can quickly load all of your necessities and necessary items like an iPad, a phone, files, cosmetics, an umbrella, etc., because this hobo bag is constructed of 100% natural leather and has several pockets. This is your most excellent option for any situation —dating, work, a party, shopping, going to school, traveling, etc. 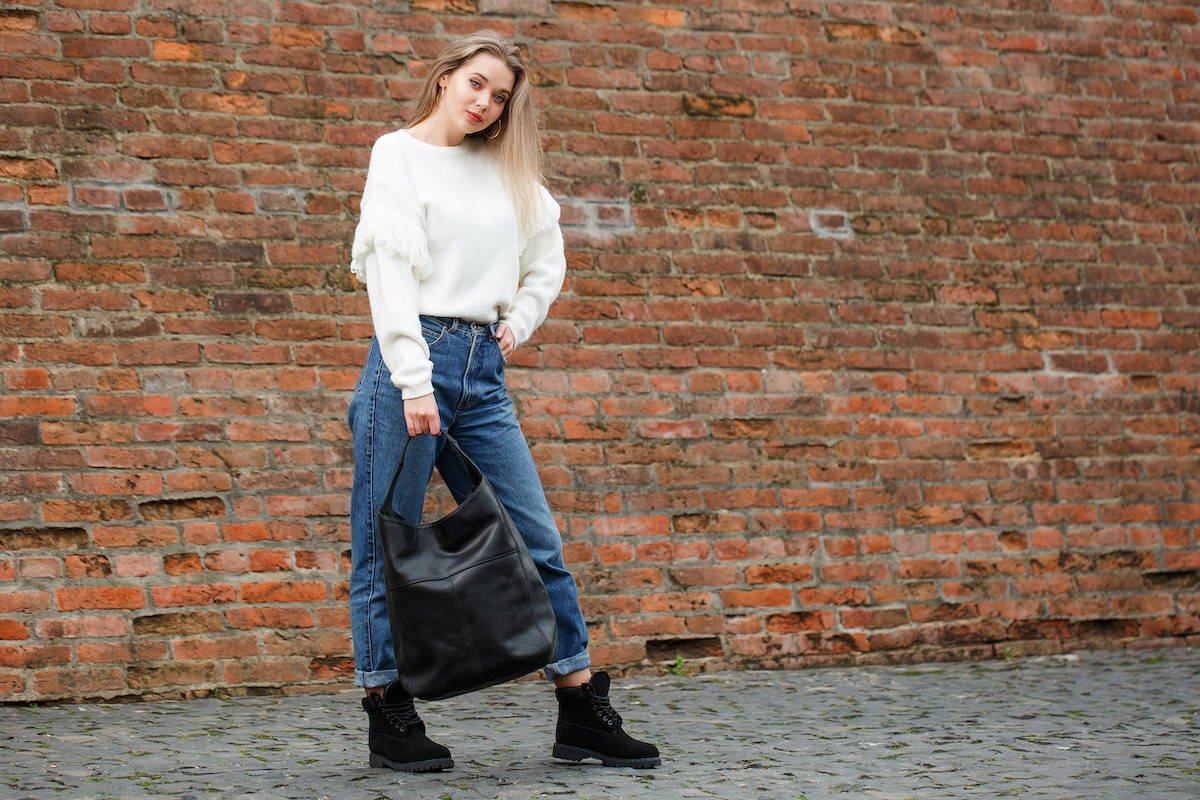 The black leather hobo bag is a chic and functional accessory that will impress you with its quality, durability, and beauty.

This medium size handbag is suitable for everyday attire (for all occasions).

Thanks to the rugged leather, everything from your laptop to your textbooks and other accessories can be carried.

The American-made, made-to-order hobo bag is straightforward and fashionable. Why are you holding out? Utilize this dependable, fashionable black leather hobo bag right away. 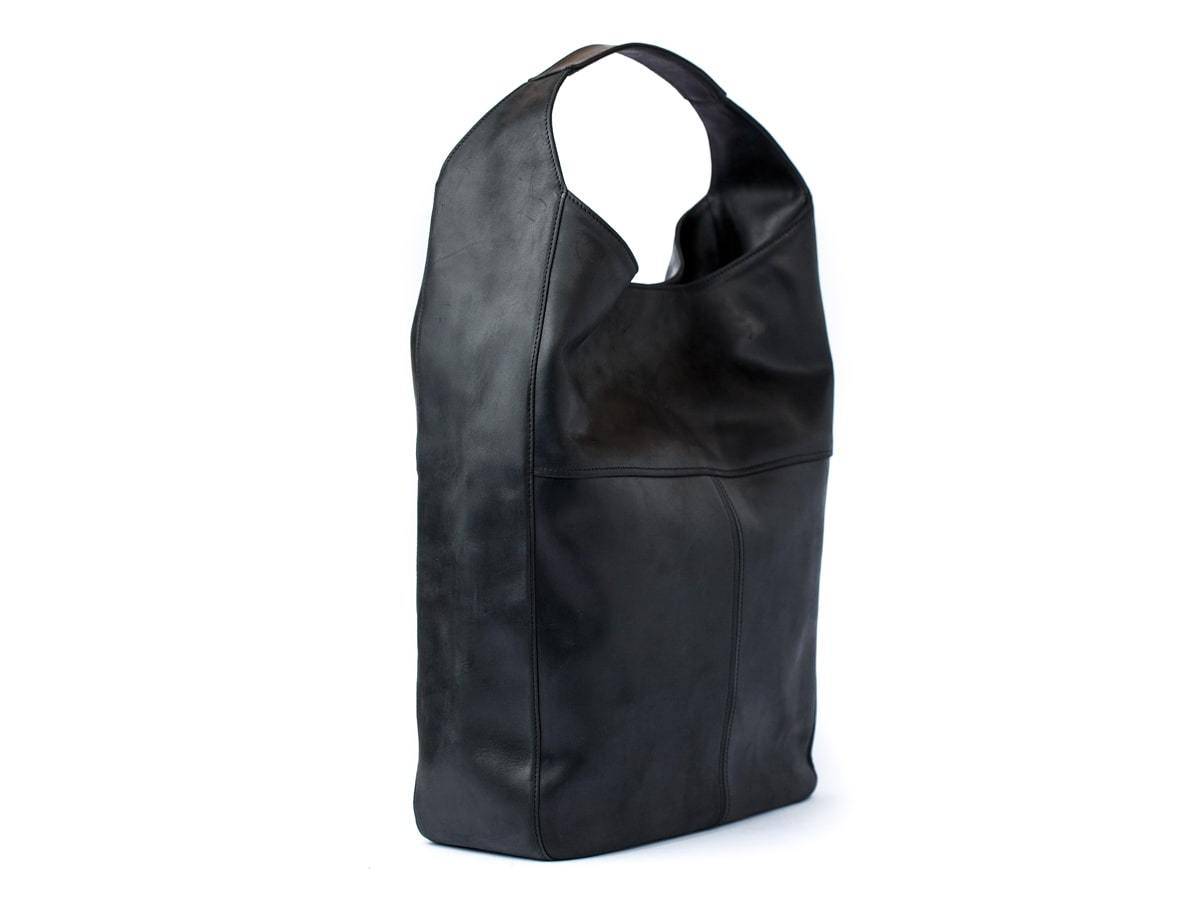 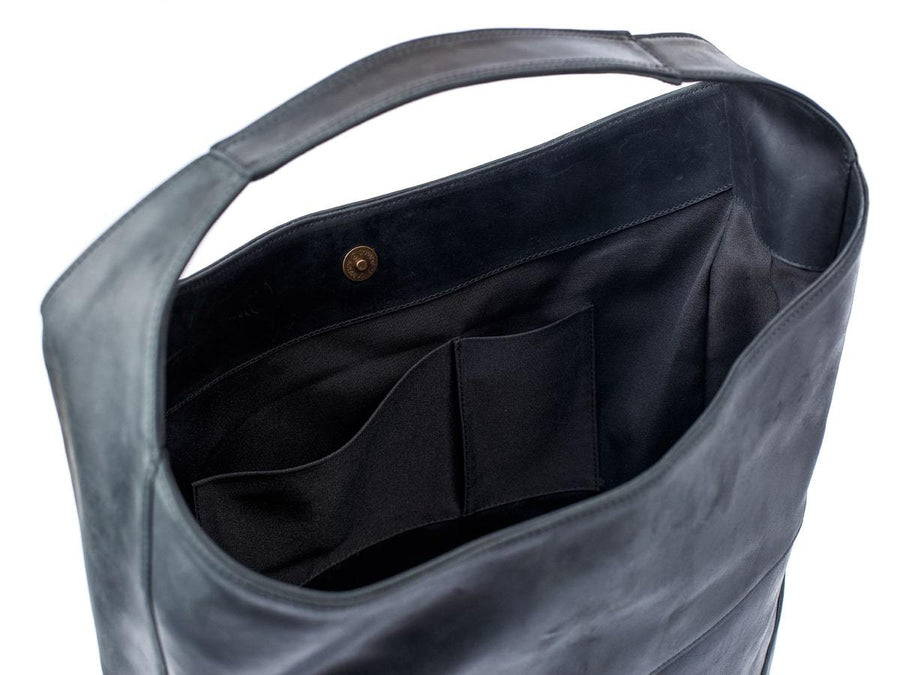 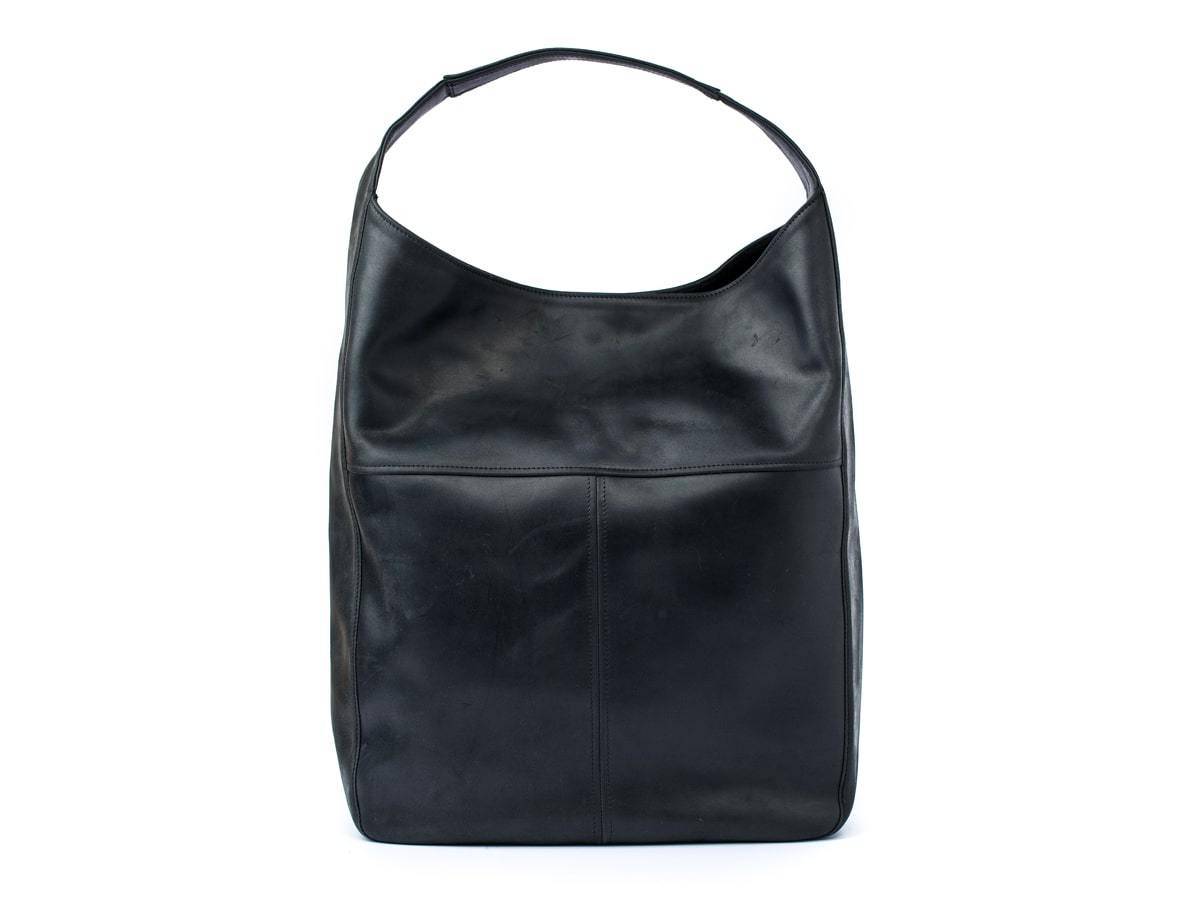 When you go out, you can store all your comforts and necessities, like iPads, cell phones, folders, cosmetics, umbrellas, etc., in our fashionable leather hobo bag because it has multiple pockets and is made of durable leather.

Whether for a date, work, party, shopping, school, or travel, it's your best bet.

LEATHER GIFTS IDEAS FOR HER;

HOW TO MAKE A LEATHER BAG LOOK BRAND NEW AGAIN; 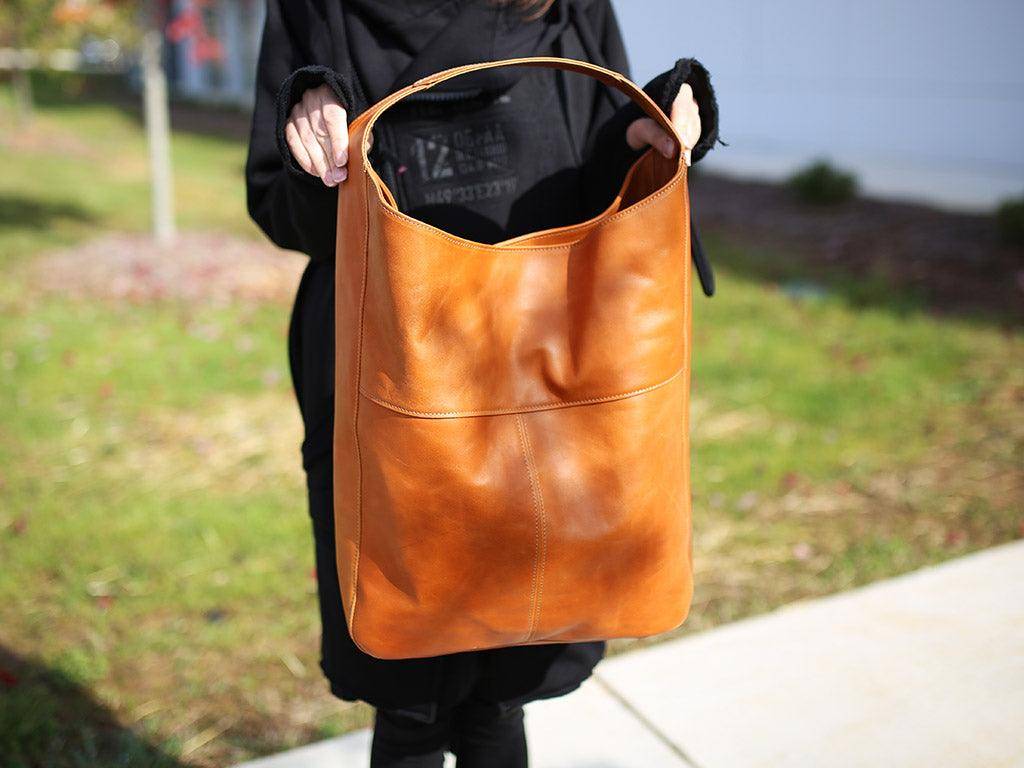 Want a purse that works for any occasion? Or do you desire a purse that complements every look? If so, you've arrived at the correct place. You require this lovely hobo bag made of natural leather.

Fashion and functionality come together in the handmade natural leather hobo bag. It's the ideal medium-sized bag for daily usage.

When you leave the house, you may load a variety of accessories and needs, such as iPads, cell phones, documents, cosmetics, umbrellas, etc., in this hobo bag's several pockets, which are all 100% handmade from natural premium leather. It's your best choice for any situation, including a date, the office, a party, shopping, a class, a trip, etc. 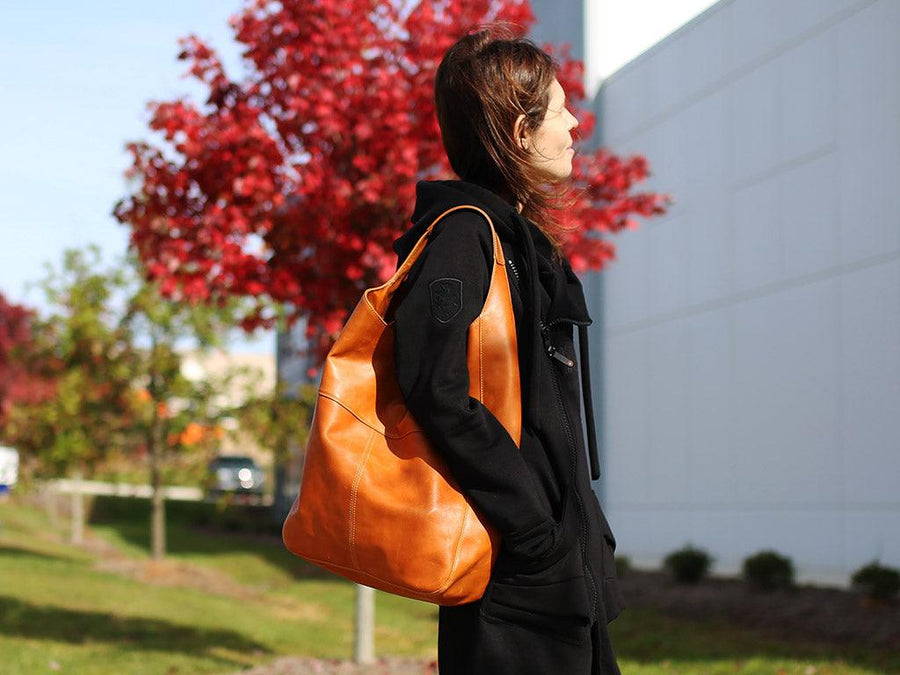 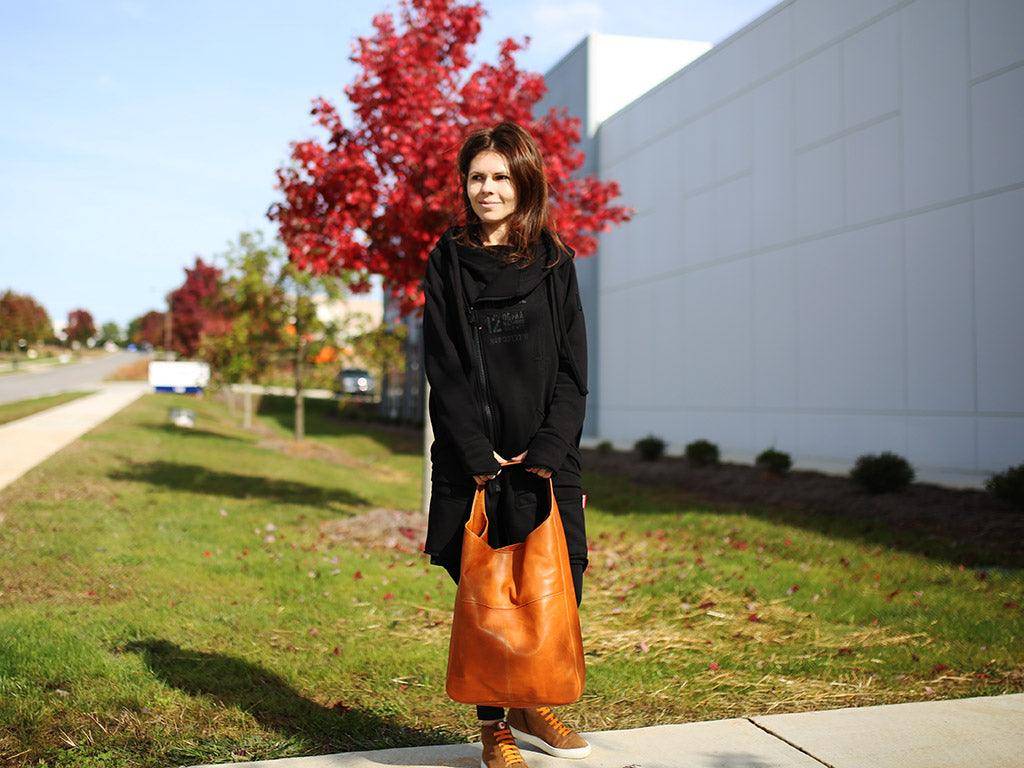 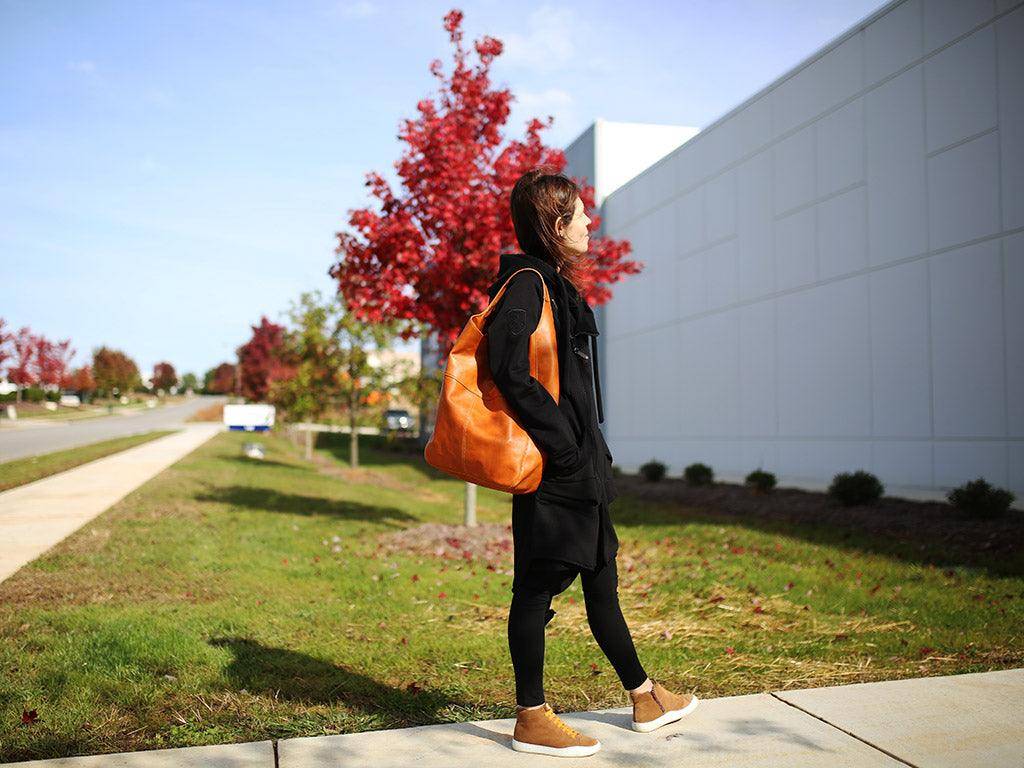 The natural color shoulder bag is designed to cross the line between casual and business style. It is perfect for any occasion. 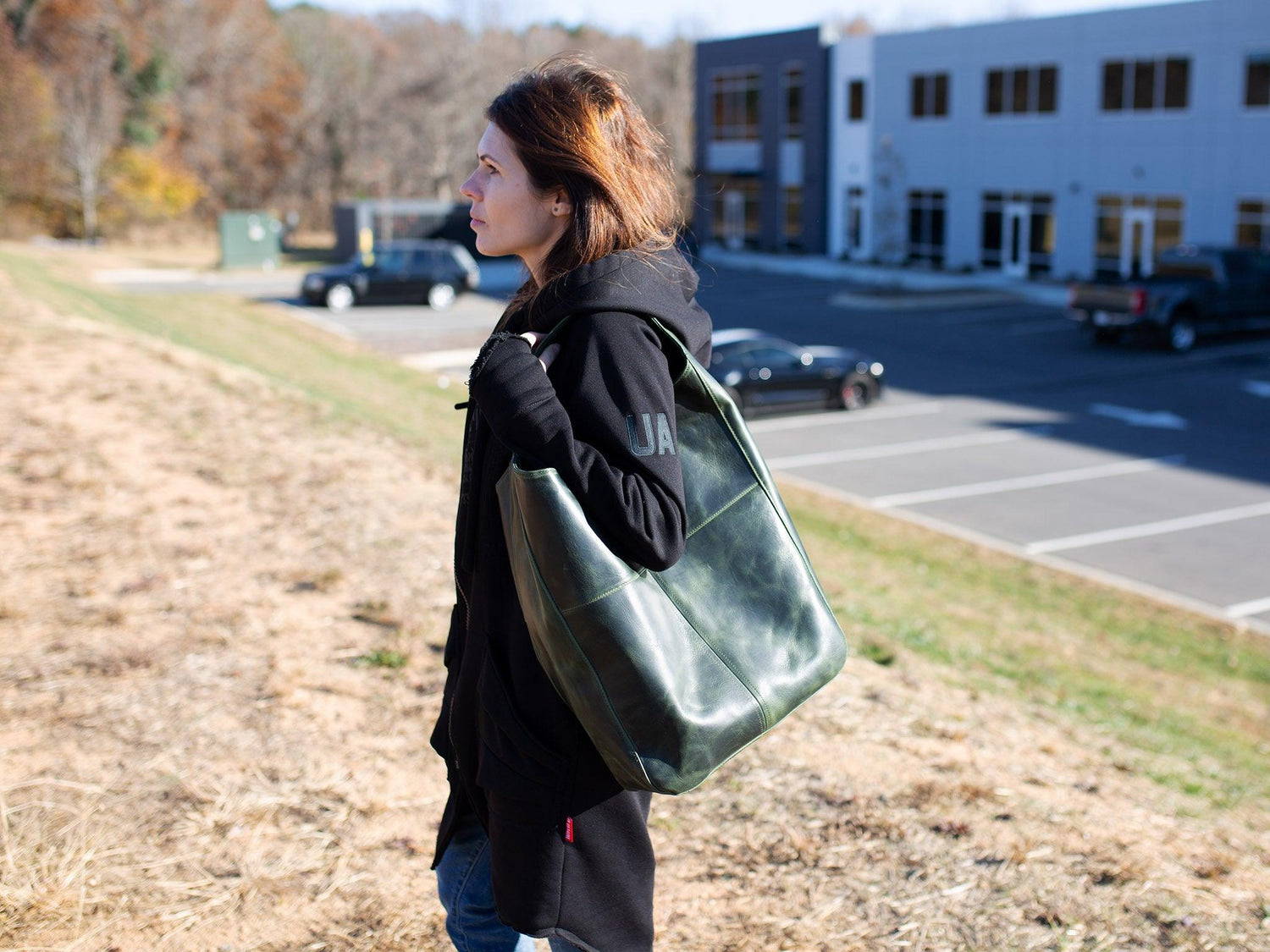 A fantastic medium-sized women's bag that is perfect for usage daily is the moss green leather hobo bag.

This bag has numerous pockets, allowing you to carry a variety of helpful and essential accessories, like a smartphone, perfumes, cosmetic bags, personal care items, and much more. It's the finest option for any situation, including a date, the office, a party, shopping, school, or travel. 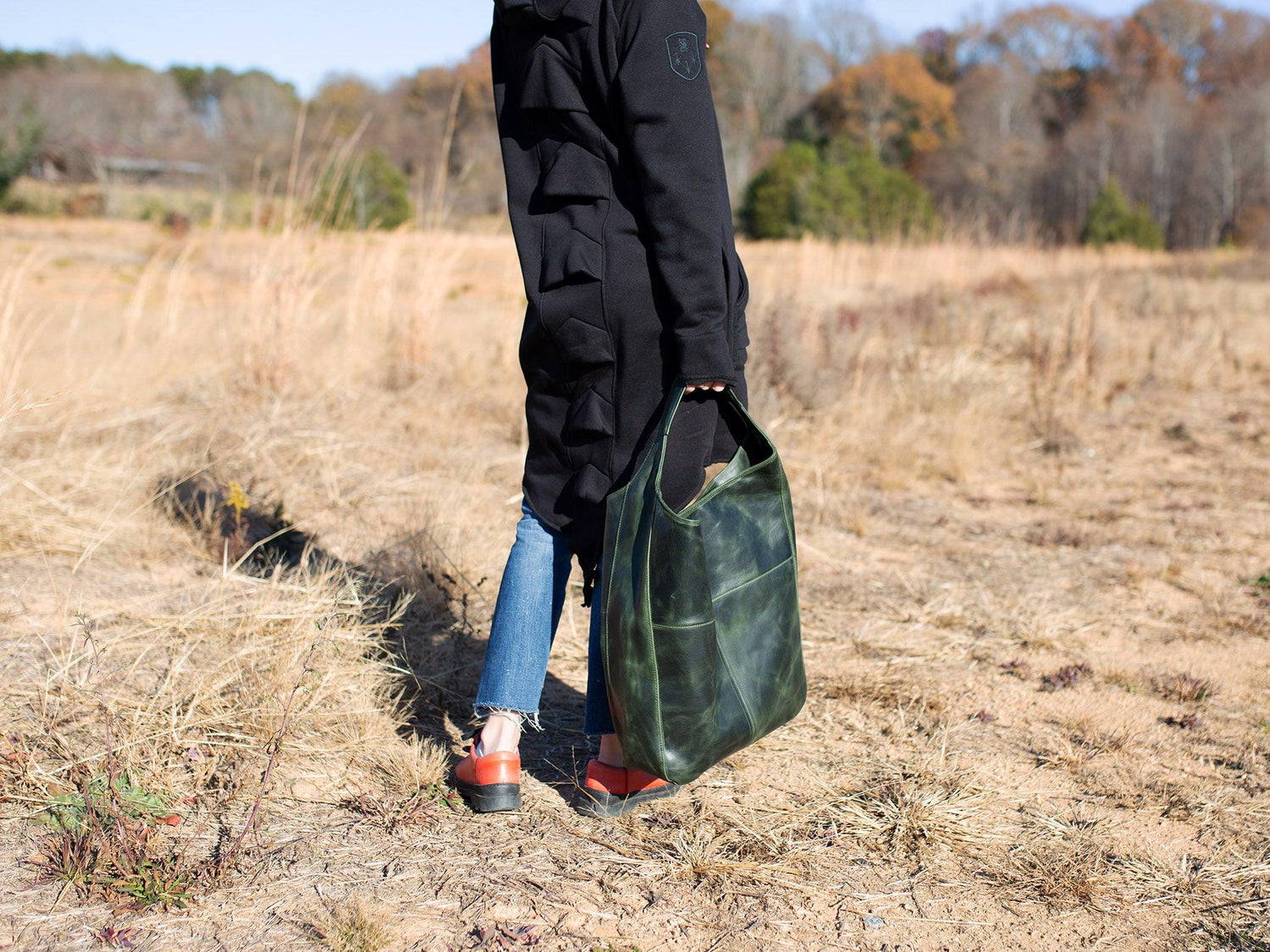 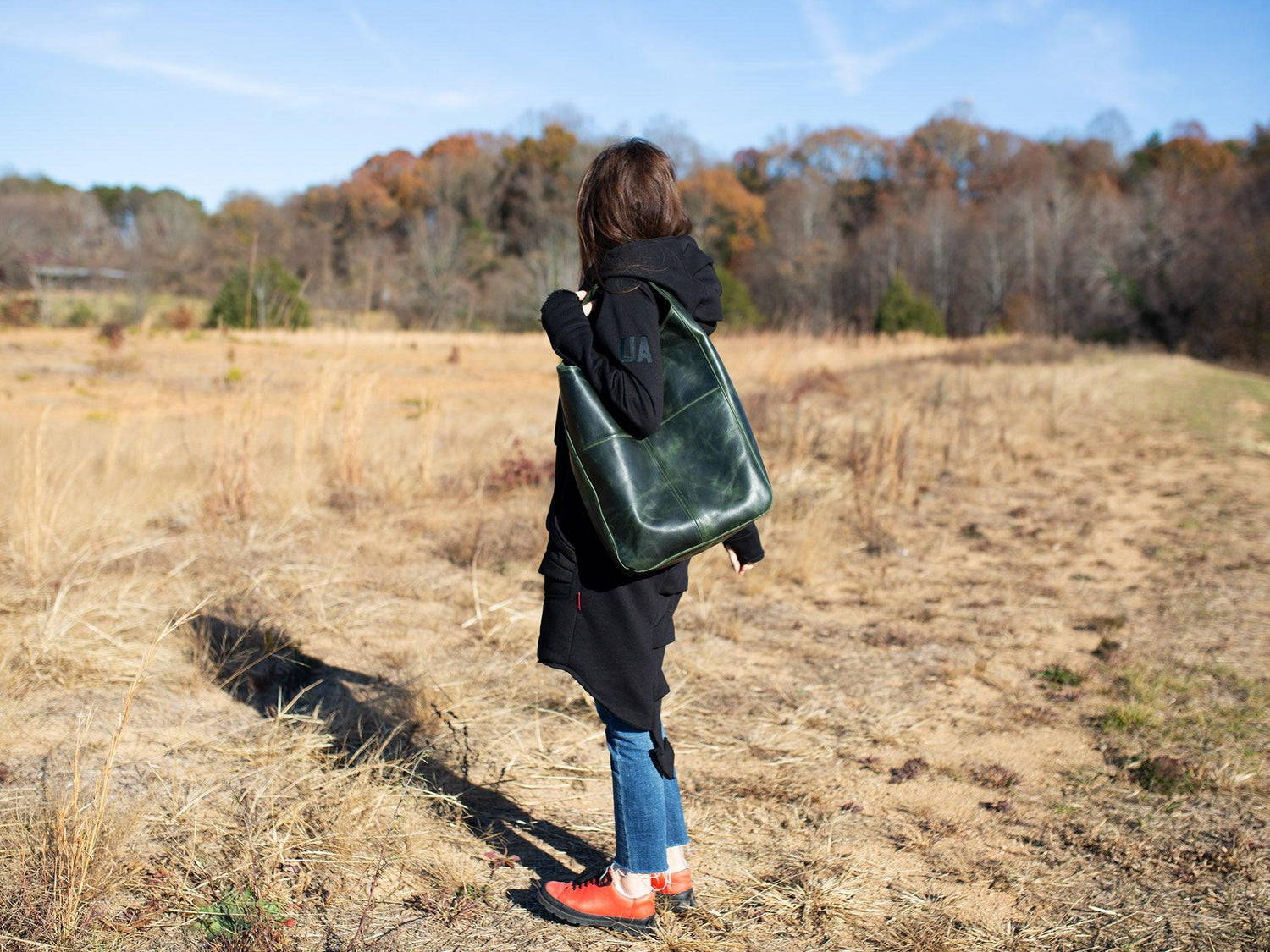 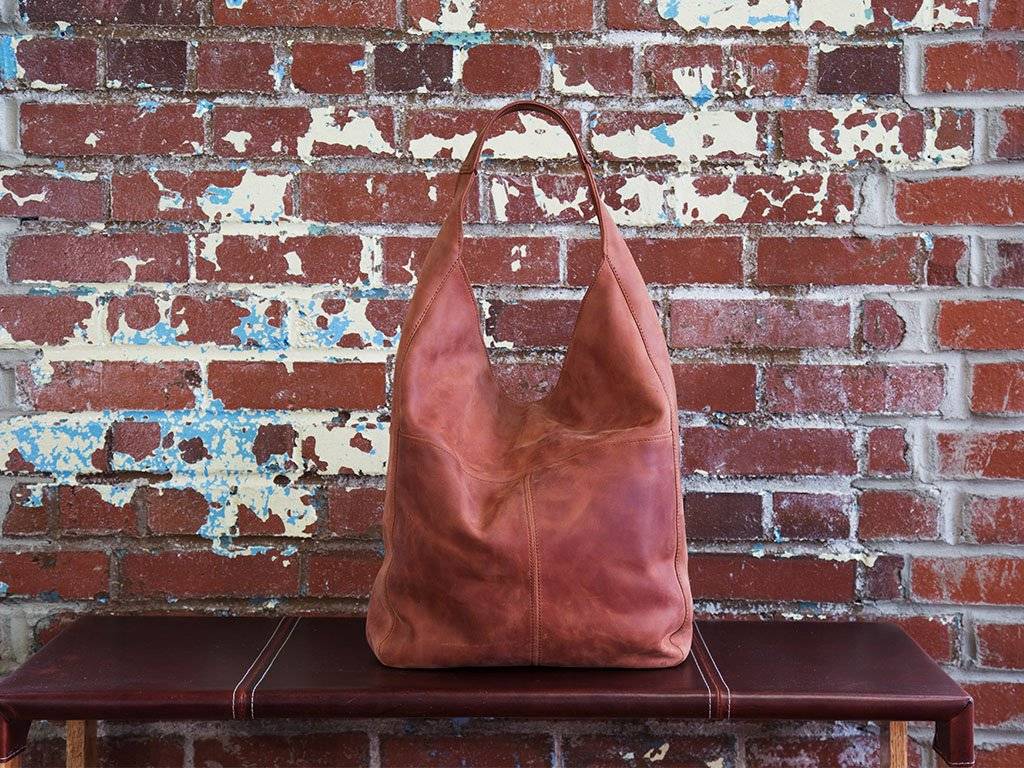 If you're looking for a hobo bag with an unusual color but want the bag to be versatile - then this chocolate color bag is just for you!

A fantastic hobo bag for every occasion! Despite the bag's distinctive chocolate color, it complements practically any attire. You need this chocolate-colored soft leather hobo bag. The shoulder bag is made to go with both casual and professional attire. It's ideal for any situation. 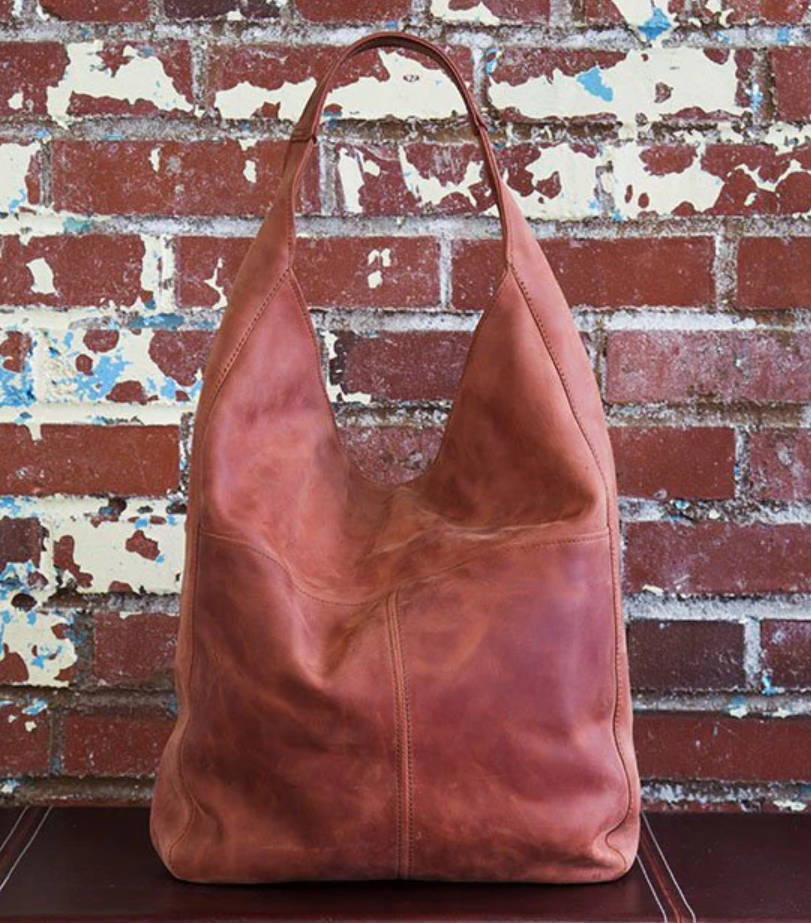 Please note that color variations are possible because this leather is handmade. Depending on how each hide responds to the dyeing process, color may occasionally differ from the image.

This leather has all of its original markings and flaws because it was cut from the most vital area of the cowhide, the upper section. This leather is of excellent quality, and as it ages, it takes on a patina that makes your specific piece a one-of-a-kind item with a distinctive pattern and vintage appearance. 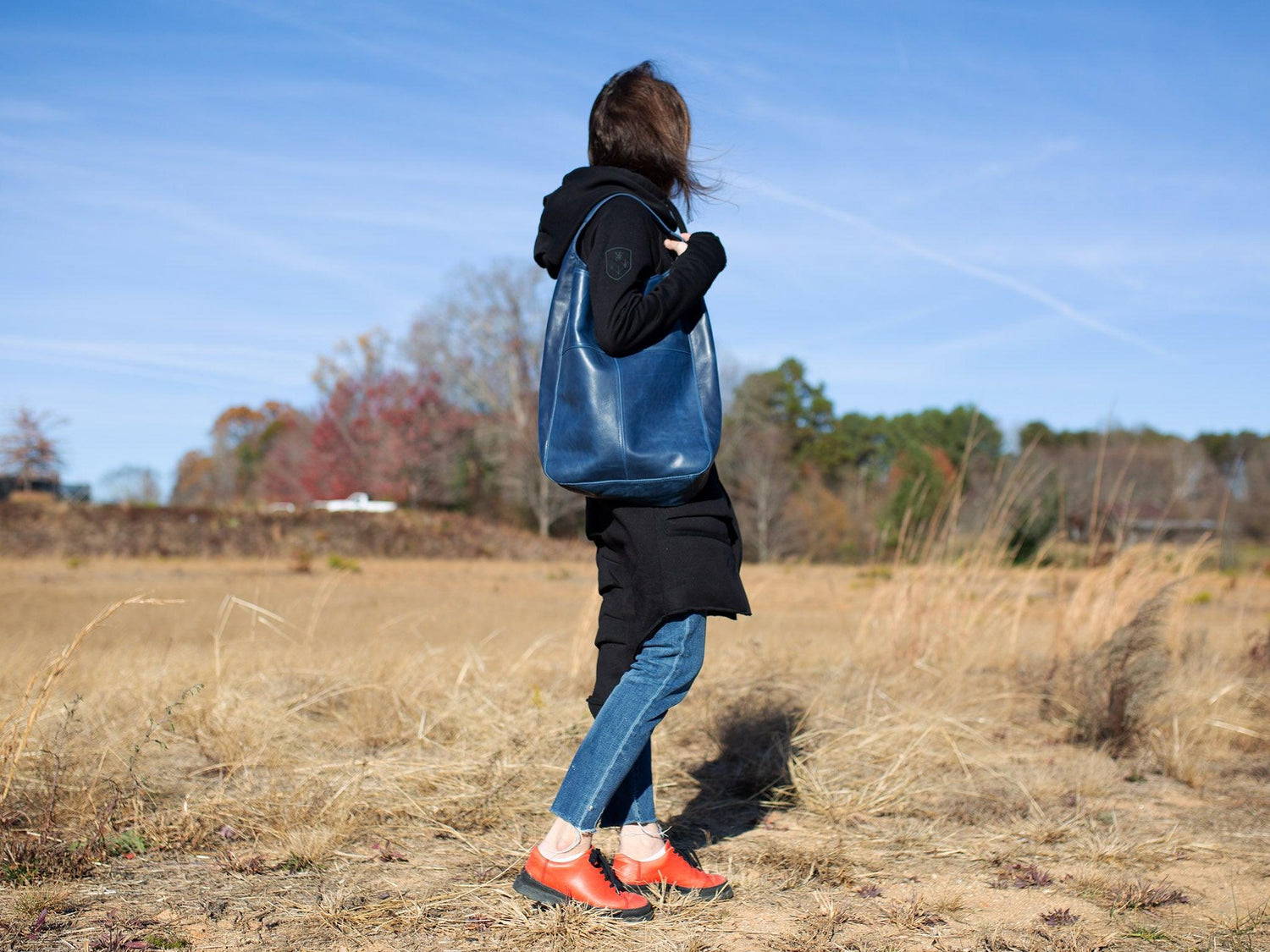 You can use this bag for work or short trips, or carry it daily. Since the bag is made of high-quality leather and has an elegant minimalist design, it is exceptionally durable.

Unique dark blue leather hobo bag from olpr online store. This attractive and comfortable bag will last a long time and amaze you with its quality. The women's bag from olpr is made by exceptional craftsmen in the USA and has many pockets. Thanks to this, it will be handy in everyday life, as you can always pack a lot of necessary things. 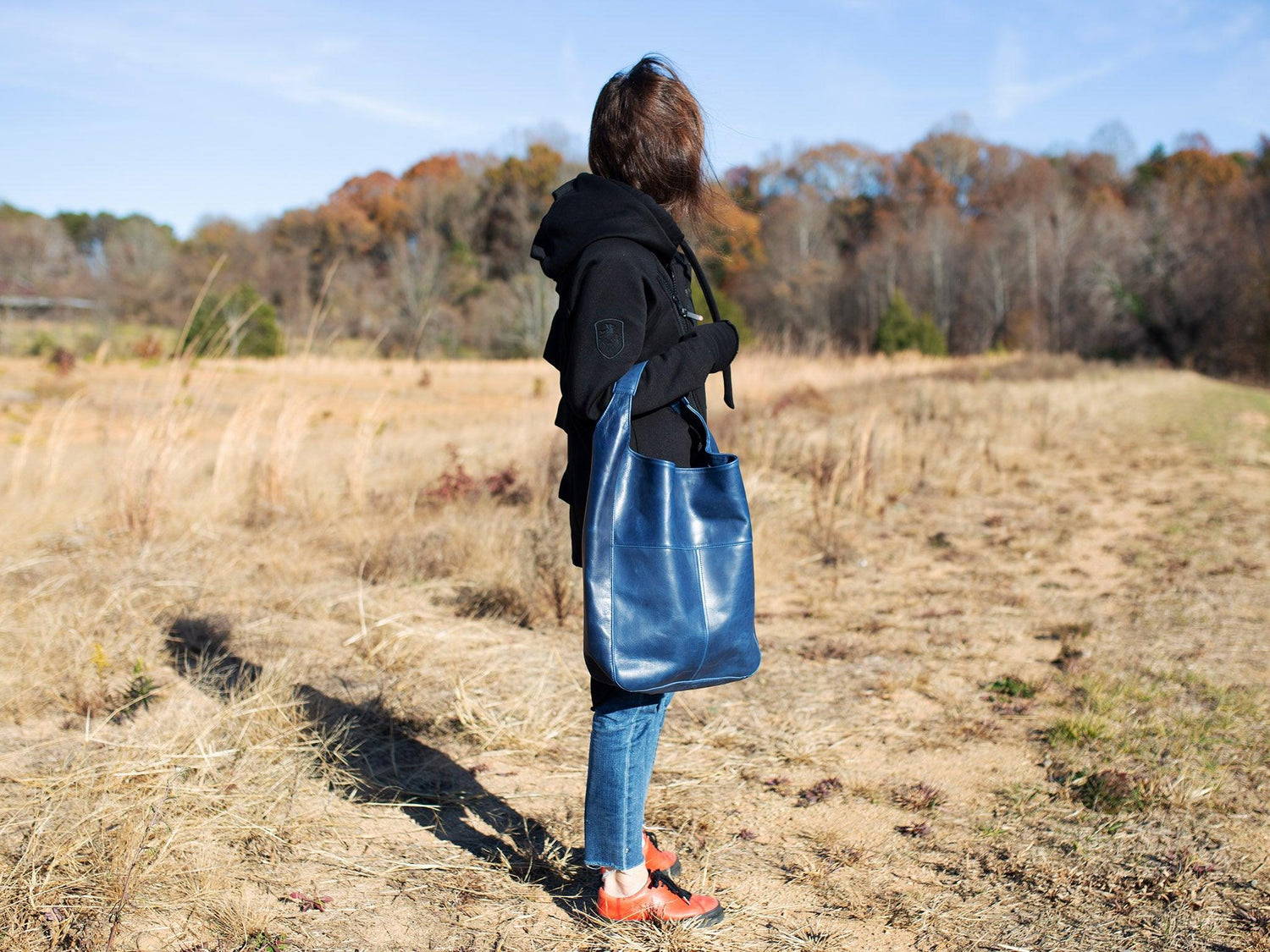 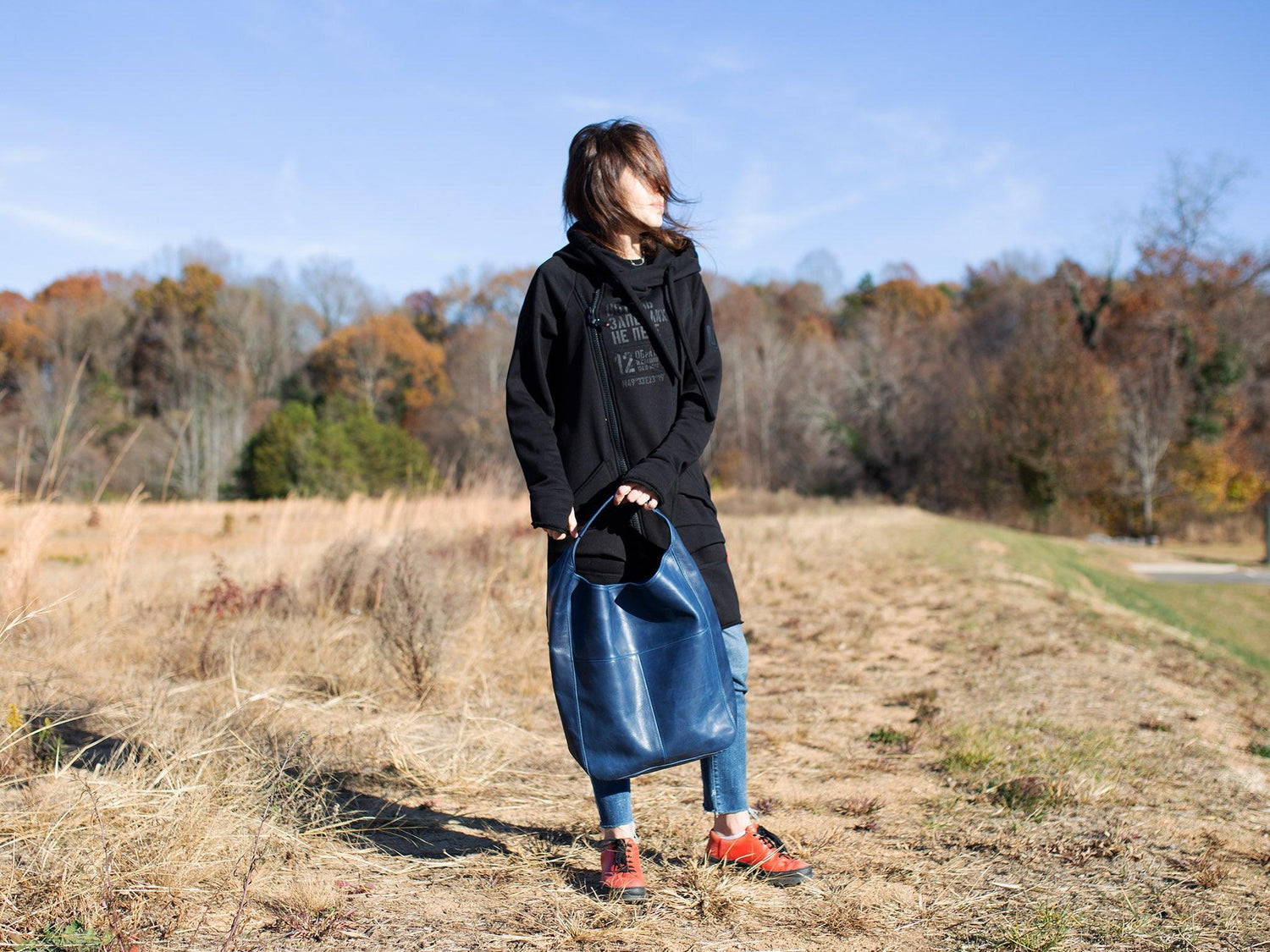 History of a Hobo Bag As the years went on, the design and the material of a bag became a very important factor. Hobos still used their type of bags, but they were considered as old-fashioned and were erased from the fashion sky. Even though, hobos made a revolution when it comes to handbags, unintentionally.

Some other types of bags appeared in the meantime, but fashion is a changing category and always wants more.

So the designers came up with the idea of making a bag similar to these shoulder bags hobos wore. They threw different types of handbags and each of them had their fans.

The improved hobo bag had many of them also. The first one of this kind appeared in 1936 under the name Gilda. They sold it per 35 cents, believe it or not. This handbag was made of the flexible fabric and its structure wasn’t fully defined.

Gucci had a hobo handbag back in the 1950s. In the next decade, it was named Jackie. The reason for its returned popularity was the hippie movement. Hippies wore patterned textile hobo bags. On the other side, there existed some made of leather and suede, which were very elegant. The first lady wore it, which is evidence of the beauty and fashionability of that time.

In the 1970 retro-style was pretty dominant. Then the design of a hobo bag was slightly different but matched with the period. After 1970 follows a little pause and then it was redesigned in 1999 and in the next few years.

Great attention was drawn to hobo bag in 2017. Karl Lagerfeld designed Gabrielle. The silhouette of Gabrielle was slightly different, with a firm base and the soft leather as a body. Similar models appeared very fast after Karl’s new model. Michael Kors, Bottega, Marc Jacobs, and many other brands released their versions. Since then, millions of hobo bags are sold worldwide each year. The hobo bag is largely considered as a large shoulder bag. It has a long strap which enables you to move your hands-free when you wear a bag. As we mentioned above, it is made of many materials, but the leather is the most common one.

Black or brown leather is a frequent pick of the customers. But, the size of the bag varies. Surprisingly, it can go from a petite one, but with a strap, to a really large one. With this handbag, you can go to extremes. The shape is usually a crescent, and it varies just a little bit. This is something the hobo bag is widely known.

When it is worn, it can look saggy or slouchy, if the material of the bag is gentle. On the other side, there are types similar to Karl’s Gabriele with a rigid base and they are always in the same position, worn or left down.

Why do You Need a Hobo Bag Let’s say at first that this type of a handbag belongs to a classic. It is something everybody should own – a large bag for everyday walks or for a relaxed night out. You can use it without thinking of the impression you will leave. Simply, wearing this kind of bag leaves a message of opacity and style at the same time. Besides, it is very easy to wear thanks to the strap.

Depending on the size of the bag, it can be combined well with the usual outfits. As the size of it can vary to a very large, you can put everything that you need in there. That is something a great number of women are seeking for.

Everything that you need, you can carry with yourself if you have a hobo bag. Space is the biggest pro for this one. Sometimes what you wear really says a lot about your personality. Wearing a hobo bag definitely tells that you are an outgoing, fun and open person.

You can find some beautiful handmade leather hobo bags in our shop. We offer a couple of beautiful designed handbags models in the outlandish colors (navy, wheat, greenish, etc.).

Guess that you don’t have any doubts about the hobo bag. This is one of the most stylish and timeless pieces that you need in your closet!